After Saturday’s basketball game at the Carrier Dome,
Victoria Weems, a sophomore majoring in Blackberry Use and minoring in the
sociology of pillow talk, exited the windy double doors of the Dome only to be propelled
into the atmosphere. The double doors of the Carrier Dome are notorious for blowing
off baseball hats, but members of Dome security are saying that nothing like
this has ever happened during an exit of the Syracuse arena.

NASA announced today that they will honor Weems for being
the first woman in space. Astronauts believe that the puffiness of Weems’ North
Face winter jacket and the insulation of her Ugg Boots will keep her alive for
at least two weeks. “I’ve always wondered the appeal of those jackets and
boots, if you could call them those,” said Neil Armstrong, the second most
famous moonwalker only to Michael Jackson. “Little did we know that North Face
and Ugg boots were compatible with life in outer space.”

This piece of news put Carrier Dome employees in between a
rock and a hard place regarding whether or not mousey sorority girls will be
allowed in the Carrier Dome for future events. “We have to consider the
possibility that another 80 pound female exiting the Carrier Dome may jet off
into the mesosphere next,” stated Carrier Dome CEO/CFO/SOB Chris Camdoo in a
phone interview. “In Ms. Weems’ case, perhaps she should have taken the name of
her sorority to heart”¦or maybe to her stomach. LMAO! Maybe then she wouldn’t
have Mary Poppins’ed away. I’m not trying to be Mr. Comedy man, but for real”¦her
sorority name is Pi Pi Pi! Apple Pi, Pumpkin Pi, Mince Meat Pi! Eat up missy.” 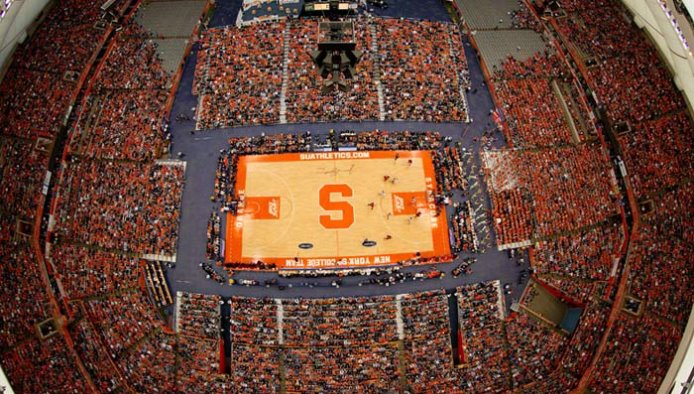 Awesome View of the Carrier Dome

During the Syracuse Louisville Basketball game. Kudos to whoever took this shot. MORE » During last night’s game, many of you may have seen the new addition to Jim Boeheim’s bench, a Bighead poster of his favorite fan, Patrick Brinkerhoff, a junior Sports Management major. Many of you may have also wondered: “Who the hell is the guy on Boeheim’s poster?” “He’s only the best fan out there,” said... MORE »