For weeks, students and members of the Syracuse community have wondered why Karl Rove was coming to speak at Syracuse University. Finally after much patience, Rove entered Goldstein Auditorium today to address the one thing he has been kept hidden for years.

“Hello Syracuse University. I am speaking today to inform you all”¦I am not Bernie Fine.”

Rove came out with this revelation after being mistaken for Fine frequently in recent months after Fine’s abuse allegations surfaced.

“See the thing is, we look a lot alike,” explained Rove. “But I wanted to clarify, I am not Bernie Fine. I’m not his brother or his cousin. I’m just his doppelganger.”

After the announcement, Rove came outside to talk to reporters.

“It’s funny that I’m getting mistaken for this man. We’re nothing alike. Bernie’s favorite cereal is bran flakes while mine is Cinnamon Toast Crunch. My favorite Star Wars character is Luke Skywalker and Bernie’s is Jar Jar Binks. We have nothing in common. Plus, I’ve never been in the news, I’ve never been a controversial figure, and I would never be rejected in society for my crimes against humanity. It’s hilarious to me.” 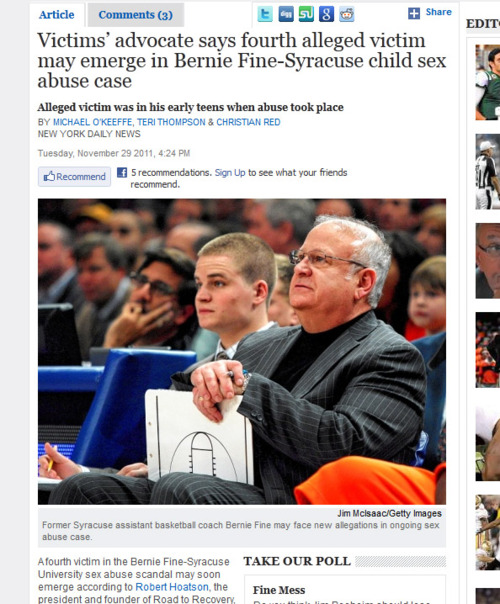 There Is Something Wrong With This Picture of Bernie Fine

I’m left wondering if they did that on purpose. Source: siphersaysstuff.tumblr.com/ MORE » No matter how hard core into preserving nature and biking the ESF kids are, trying to ride a bike around when it looks like this is just not going to happen. Check out the one on the left.  MORE »