In what many are calling the most questionable move in its history, SU Abroad has launched a new program. In Antarctica.

Officials from SU Abroad have stated, “It was only a matter of time before our program spread to the icy underworld.” SU Abroad currently has campuses set up in almost every country in the world. Yes, even Canada.

Surprisingly, the move has been well received by the student body. Rachel DiMatteo, a sophomore American History major, has expressed interest in the new program. “It’s definitely something I’m considering for next year. I mean, I’ll get to be in a different country, but the weather will mostly be the same, so I won’t really get homesick. Plus, there’ll be penguins!”

Questions are still circulating, however, about the likelihood of people actually enrolling in this program. Many are suggesting that the idea arose as a means of expanding for expansion’s sake, that SU Abroad has taken it upon itself to institute a policy of manifest destiny at SU.

Representatives from the rest of the university, and around the country could not be reached for comment, as they were too busy chanting “USA! USA!”

Junior student Patrick Brinkerhoff has papacapillorange, a rare disease that has only been diagnosed twice before in history. While people suffering from this disease generally lead mostly normal lives, they do suffer from one strange side effect: their blood is orange. Other symptoms of the disease include extremely sore throats, especially following particularly exciting sporting... MORE » 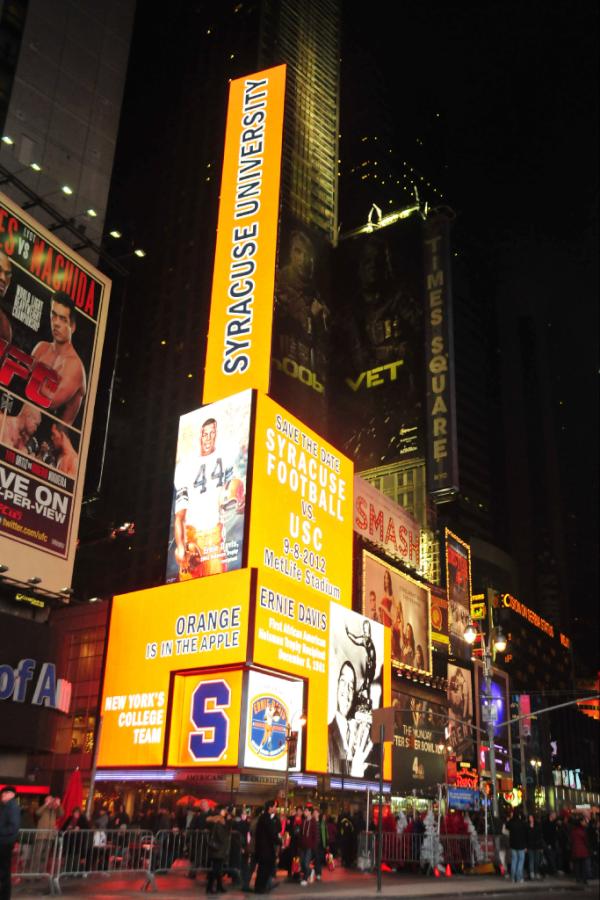 We take up every single ad spot. Cause we are NEW YORKS COLLEGE TEAM! Source: https://beantownbound.tumblr.com/ MORE » On Friday, February 19, Kevin Ashton was turned away from Kimmel Dining Center because he was too fat. Ashton approached Kimmel at approximately 1:35 a.m., prime time for Kimmel-goers. However, when he got to the entrance, security guards were in place, upholding the new policy that all guests to Kimmel are required to have the... MORE » Professor Gupta, long-time professor in the SU math department, came clean last week, stating, “I admit, my English is, in fact, impeccable. The faÃ§ade, one which I have kept up for the last few years, was all an act, smoke and mirrors, if you will, used to confuse students.”   Students who previously enrolled in... MORE » Famed Harvard symbologist Robert Langdon made world headlines from Syracuse, New York this weekend when he announced that he had finally discovered the Holy Grail under the sort-of-impressive glass obelisk crowning Schine Student Center. “Well, I’ve been looking for that pesky grail for awhile now,” Langdon said of the Holy Chalice in a phone interview,... MORE »