Tina Fey’s long running show, 30 Rock, will be airing its hour-long series finale tonight at 8/7 central on NBC. Let it be known that this was not Fey’s decision to end the show- it was the higher power of Syracuse University.

The brief synopsis above is but a minor element of the entire show. Many people think it is just a goofy situational comedy, but Liz Lemon would say “BLERGHH” to that! The show is much more than that: it is a Syracuse insult machine!

The show has insulted Syracuse University on multiple occasions. 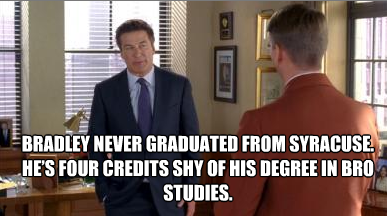 This one was in the show’s 6th season and dissed The Cuse’s awesome reputation of being a school with mad bros and shit!

The show went on to insult our orange people once more in the final season. Luckily, Tina Fey is moving on to greater pastures as she is starring in the upcoming film, Admission, with Paul Rudd and won’t have a venue to express her arbitrary hatred for Syracuse.

Sadly, Lena Dunham has jumped on the anti-orange bandwagon in her HBO show, Girls.

Auspiciously, Schmidt on Fox’s New Girl represents Syracuse properly. He embodies our attractive, bro essence that we have come to hold dear. 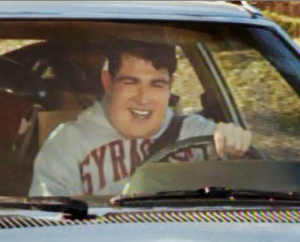 I would like to thank victorias secret for making these

Fight breaks out at Nick’s Tomato Pie in Syracuse, New York. 1am, 1/29/11. Note: it is the girl who reaches over glass and starts flipping pizzas. The pizza guy then slaps the pizza pan down. MORE » Double Fist Pump!!! You miss out big time if you weren’t there MORE »

Here’s one for the Plan B pill… MORE »

Do you like hot girls? Do you have a car?

The sisters of Delta Gamma are hosting a car wash this SATURDAY, September 4th between the hours of 11-3. So, if you have a car, go find the nearest mud-pit, and get that badboy soaked up. The dirtier your car, the longer it will take to clean it! (actually, this doesn’t really work. they will... MORE »