“This real hot blonde was kind of eyeing me across the dance floor, right? And she’s with her friends but she doesn’t look too interested in them, so I go over to her.”

Ross said he began “grinding up on her ass,” and everything fell into place.
“She didn’t do what girls usually do with me, which is give me a disgusted look and disappear into the crowd. I was stunned.”

According to bystanders, Ross and the blonde to be named later reportedly danced through several songs, including an unusually long remix of “Sandstorm.” Mr. Ross felt confident that the anonymous woman would be going home with him for a traditional drunken collegiate hookup.

“She was in the bag, man. The deal was sealed. Why would you dance with a guy for that long if you weren’t interested?”

Then, disaster struck, as the DJ began playing Lady Gaga’s hit single “Bad Romance.”
“That song came on, and she just let out this shriek and turned around and shouted “OH MY GOD, I HAVE TO FIND MY GAY FRIEND! WE ALWAYS DANCE TOGETHER TO THIS SONG!”

The girl vanished into the pulsating darkness, never to be seen again. Eyewitnesses later reported seeing her laughing and hugging a man dressed in a leather vest and skinny jeans. Ross left the party and returned to his dorm soon after being abandoned. Attendees of last night’s open party at Sigma Omega were severely disappointed and underwhelmed to find there were not enough elevated surfaces to dance on. The social fraternity’s annual beach party often receives critical praise for its strong girl-to-guy ratio, long lasting alcohol supply, and over-the-top decor including sand-covered floors and a basement full of... MORE »

Students protesting an anti homosexual demonstration next to Newhouse.

Another reason why I love this school. You think theyd get it by now. MORE » 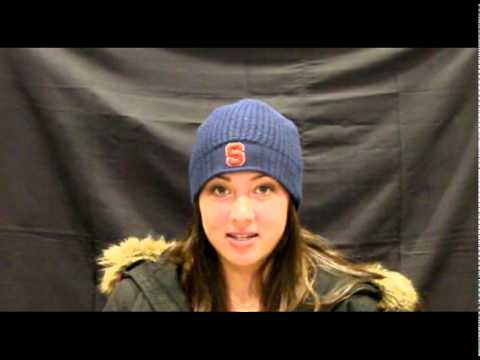 Beyond Better: A Manifesto for Queer Youth MORE »