In a recent Daily Orange
article, it was reported that Food Services will collect 30 tons of waste for
composting (see Heather Wentz’s article in the September 15th
edition).

Many students find themselves wondering, “Why was Lady Gaga
wearing a meat suit at the VMA’s?” But they’re also wondering, more relatedly,
“What is composting?”

Composting means, quite simply, that uneaten food will no
longer go to waste. Instead, it will be served again.

“So much food goes wasted by these ungrateful kids,” said
Mark Turkenberry, Assistant Director of Food Services. “Why throw it away? Most
of it’s still good!”

What about the chicken parmesan that Johnny Nostomach ate a
few bites of and then sent down the conveyor belt? That will now be part of
Jimmy Fatass’s chicken parm pizza. Mmm, cheesy deliciousness!

“To be honest, we’re considering saving everyone time by
just connecting the conveyor belt of used trays straight to the hot food line,”
said Turkjksenberry. “Or, even better, just have students leave their uneaten
food at the table. Then, let students just coming into the dining halls sit
down and have their food ready for them. We’re all about recycling.”

Originally, the uneaten food was supposed to be sent out to
farmers for fertilizer, but Food Services saw a better financial opportunity
right under their noses.

“Why spend unnecessary man hours sending loads of compost
out to farms when we can save money by serving that “fertilizer’ to our
students?” asked Turdberry.

Food Services will also reportedly have a new slogan: “We
give a whole new meaning to the term “Going Green.'”

Get it? Students will be green in the face before they vomit
up the recycled pasta carbonara.

Which will then either be served again or worn by Lady Gaga
to the Grammys. Who Made A Cardboard Cut-Out of the Can Fairy?

The can fairy doesn’t recycle! He brings those cans in for cold hard cash! MORE »

An epidemic has swept the Syracuse University community. Students are entering the Ernie Davis Dining Hall’s sandwich line only to find out that literally years have gone by when they finally receive their sandwich.               “It was nuts!” commented former Syracuse student Kristina Barvara. “I... MORE » In a surprise turn of events, Food Services has announced that it will begin to cook all of its foods. Yes, even meat. The news comes after a record-high 498 students got salmonella last month, and 315 got e coli. Still, officials are adamant about the change being unrelated to the record illnesses. “We still... MORE » 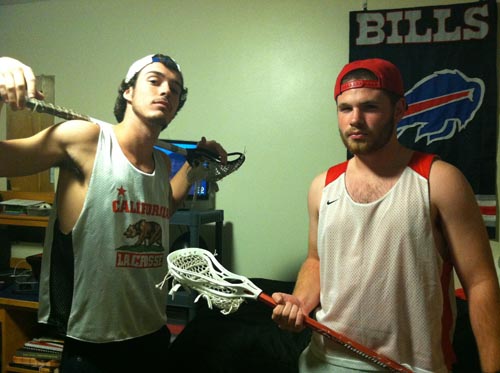 What do rain, wind, and sunshine have in common? They don’t keep a Syracuse “brah” from donning a snap-back baseball cap. (A “brah” can be described as either a frat guy or a lacrosse player who wears pastel colored shorts, lacrosse pinnies, and fresh kicks. They are usually ready to party all the time. See... MORE »