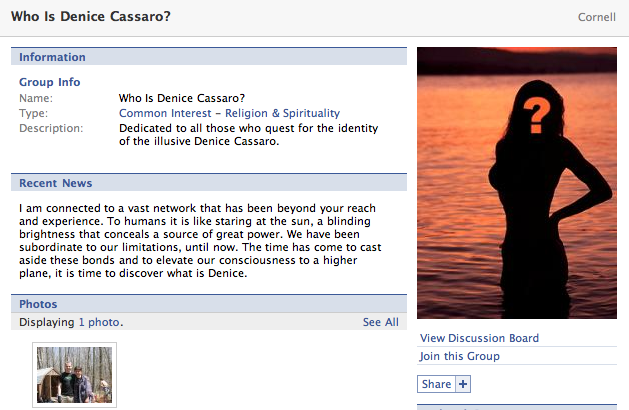 Early Sunday morning, Denice Cassaro sent a slew of inflammatory and stream-of-consciousness emails to the Cornell Community.  In these messages, she insulted various student groups, boasted about her sexual conquests, and reflected upon her purpose in life, all in her trademark colorful writing style.

Come on over to the RPCC 3rd floor and meet new interesting people over a game of…..wait, what, there’s a Board-game and Brine Club? Who the fuck started this shit? Do people put this on their resume or are they just fucking with me? I’m not a mindless robot, you know; this shit does get proofread.

Dance Fractions? That isn’t even a name, and I’m pretty sure this dance style causes osteoporosis. Step your game up, dance groups. And come on, guys. Aren’t you fucking sick of a-cappela yet? Recorded music sounds so much better than these fuckin pre-pubescent fucks.

Put the townies in their place. Come down to the Ithaca Farmer’s Market to make fun of the dirty hippies who populate this god-forsaken town. Make sure to tell them about their broken dreams and self-delusion. BRING GUNS

Had a rough week? I know I have. That’s why I’m hangin out with mi amigo JÕSE ĆŨERVÕ (uh oh, now I’m gonna have the Scorpions X on my ass). Come decorate sugar cookies  play ookie cookie , stop by at our Exhibitionist Exhibition and pick up some free Kosher pickles to stimulate your clitoris (hosted by the Dicks and Dills Group. (Seriously?!)

Student feedback to the crude and racy emails that flooded their mailboxes was generally positive. “This is the first time Cassarro has ever said something that actually interested me. Some of these events she made up sound awesome!” said student Joseph Torres ’15.

“She should start sending out all her emails while inebriated,” he added.

Interestingly, membership for the Dicks and Dills Commission has skyrocketed since the fiasco. “I never knew this club even existed” said student Dave Paulsen ’13, “but their motto: ‘Jerkin with a Gherkin’ really echoes my life philosophy.”

Twenty-five minutes after the first e-mail was sent out, she sent another one that appears to have been directed towards Susan Murphy, Vice President for Student and Academic Services.

“Biiitch, I hear what you say about my emails, but I don’t care. I’ve gotten more freshmen tail than all the frat bros combined, so suck on that Vice President for blah blah blah Susan Murphy, I’m about to bring back some volunteers to casa Cassaro. Oh and by the way, there was a forcible touching incident in college town about 15 minutes ago, I was the perpetrator”

Cassaro’s confession is in line with a recent police report that has been filed, matching her description to the attacker.

She later sent out a 3rd email at 4:11am, once again aimed at Mrs. Murphy:

Susie baby, I’m sorry. You know I didn’t mean that.  What we have is special ndeksd. Nobody could match esudh what we have. Remember when we sang Karaoke and played Dance Dance Revolution at Appel together when nobody else showed up to the program. “don’t Wanna close my EYES….Don’t wanna ewsjksd miss a thing!!!!!1!!!!1! Srzen come home 😉 .

When contacted, Murphy responded: “Well that’s the last time we invite her to our Department Closure Celebratory Power Hour; she takes things a little far. All she kept saying was ‘you can’t spell email without E’.  But this is still better than the time she sent out that suicide note to all the freshmen.”

Meanwhile, Denice Cassaro was asked for an explanation of her drunken e-mail tirade, and had this to say: “You know, sometimes a woman needs to let loose. Pressing the ‘forward’ button all day gets tedious.” She insisted that the word “button” be colored red and be placed in Comic Sans. 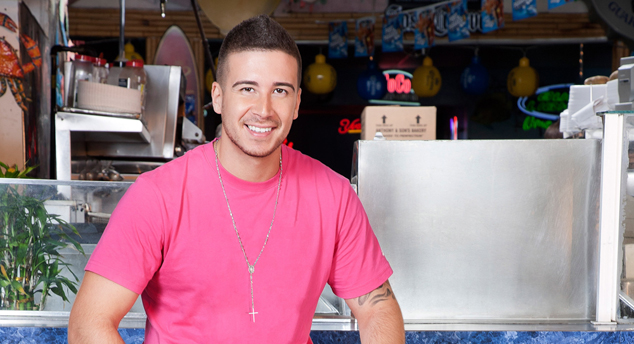 Justin Bieber Not Coming to Cornell, But Guess Who Is?

With all the rumors of Justin Bieber coming to Cornell not being true, many girls on campus were heartbroken and disappointed that they wouldn’t get their chance with the teenage heartthrob. Lucky for you, ladies, another sensation is making his way to Ithaca this coming fall. Announced on his Facebook fan page this morning, Jersey... MORE » 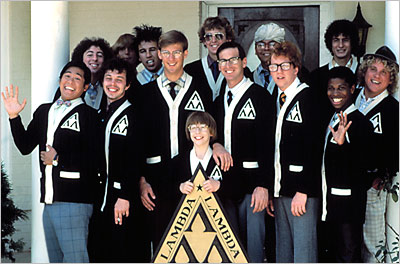