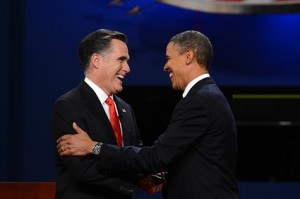 US presidential candidates Barack Obama and Mitt Romney have mutually decided to cancel the final televised debate tonight, citing the fact that no matter how much they argue back and forth, there’s really nothing they can say at this point that will change each other’s or viewers’ minds and they should probably just go ahead and agree to disagree.

“Mitt and I could talk about economics, Big Bird, foreign policy, and women’s rights forever, but what’s the point?” said President Obama. “I think I’m right. He thinks he’s right. We have the right to our opinions and that’s that.”

“Why waste our time fighting over it and steamrolling over the moderators when we can talk about way cooler stuff like sports and, WAIT, how epic was last night’s episode of Homeland?” Romney chimed in.

When asked whether the debates might instead serve a greater purpose of educating the general public of their stances on various issues, Romney was dismissive. “Can anyone name a single stance of mine on any issue, about anything, ever, after spending an hour and a half watching me debate?”

“Of course not!” Obama rebutted with a hearty chuckle. “Between us sidestepping every question and the American public more focused on being as hilarious as possible on Twitter, it’s pretty safe to say nobody walks away from a debate even a little bit more informed than they were to begin with.”

Both candidates agreed that the election is pretty much a total crapshoot at this point, that the issues don’t really matter in the grand scheme of things and it would probably be decided by a few random schmucks in swing states who ultimately vote based on which one of them had the prettier signs or the more vicious attack ads.