In a press conference called on Monday, iSchool adjunct professor Dan Mason shocked the campus community when he admitted to a grave “transgression” in his career at Syracuse University.

“I do not know, nor have I ever known, the purpose of the iSchool as it relates to the greater University system,” Mason said in a lengthy prepared statement.

When asked by stunned reporters to elaborate, Mason replied “Well honestly, what does that mean, iSchool? Is that some term to make us sound like we’re all “Generation Now?’ Why? What the hell for?”

Shortly after the conclusion of his press conference, Professor Mason released a brief second statement announcing his resignation from the University faculty, claiming that he wanted to “spend more time with his family.”

Things are not quite what they used to be in Hinds Hall, home of Syracuse University’s iSchool. Apple inc., under new leadership, has decided to extend their brand and buy out anything and everything that bares a name similar to their products. The iSchool was not left behind. Apple states that they intend to keep... MORE »

Â Â  Â  After a hard-partying weekend at Syracuse University, Sophomore student April Stevens and her friends decided to devote Halloween Sunday to watching childhood Halloween specials on Youtube. “We remembered how much we all liked Boy Meets World, so we figured we’d watch its special. We forgot how terrifying it actually is. It shows Feeny... MORE » 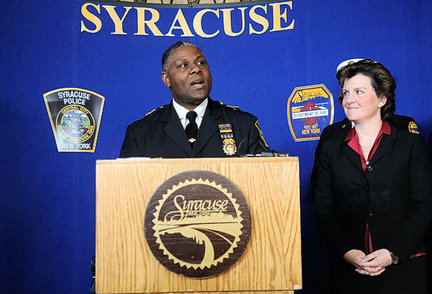