A recent study conducted by the USC School of Cinematic Arts indicates that a student’s prowess as a filmmaker can be determined by the color of his or her flannel shirt.”¨”¨

The findings come after months of peer reviewed testing on a random sampling of cinema students. To little surprise, green flannel nabbed the lead spot with yellow ultimately taking up the rear.”¨”¨

“Ha!” an unnamed green shirt was overheard exclaiming after the results were released Wednesday.”¨”¨

Sources close to the school say that in the wake of the findings, students have begun treating one another in a critical, hierarchical fashion.”¨”¨

“Many are drawing comparisons between current behavior and India’s caste system,” said a school adviser who requested anonymity, “but I think it’s more akin to ‘Lord of the Flies.'”

Casey Fremont, a sophomore blue shirt studying production, said, “I kind of like the system. It really puts kids in their place. My last 290 was really, really good, so I’m going shopping for my reds after class.”

One source close to the dean said students without any flannel in their wardrobe can expect notice of removal from the program within the week.”¨”¨

Members of the faculty have declined several requests for interviews. However, cinematography professor Earl Hartley was seen leaving the SCA building wearing a yellow flannel shirt. His recent feature “Unstoppable” was met with mixed reviews. By: leaf and Lia So Leaf and I were sitting around lamenting our lack of social lives and decided, “hey, you know what the world needs? More milkshakes.” Once the Froyo and cupcake bubble pops, there will be a resurgence in the tried and true beverage that has gone ignored. Unlike most other visionaries, we... MORE » 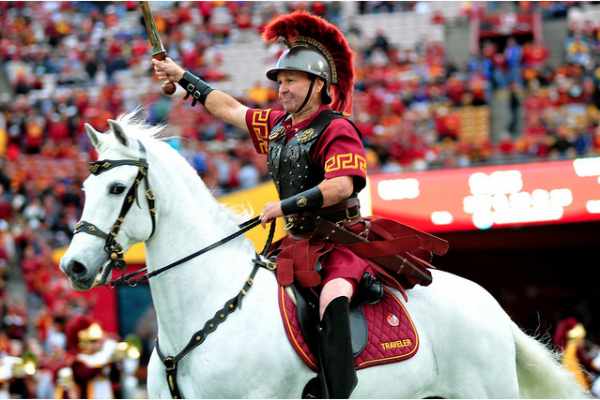 This past weekend marked the 50th anniversary of the white Andalusian horse Traveler, the official USC mascot. Many confuse the mascot be Tommy Trojan, but the two are in fact very separate. We immediately went to Tommy to find out what he had to say about the anniversary, but instead of a supportive friend, we... MORE » This Saturday, USC defeated long-time rival UCLA 28 to 14 in their annual football matchup; however, the UCLA football team wasn’t around to see their embarrassing defeat. The team spent the second half of the game sleeping in the locker rooms at the Rose Bowl. According to offensive coordinator Norm Chow, the team decided to... MORE »