Tension and unease have been running high on the two major college campuses in the Los Angeles area over the course of the past week. In the lead-up to the annually contentious UCLA-USC football game, pranks and insults have grown more vicious than in recent years. In reaction to a rule change preventing the USC Trojan mascot from “stabbing the UCLA field” during the marching band’s performance, USC students were rumored to have vandalized a UCLA sign on the northern edge of the campus, spray painting ‘USC’ over the existing school logo next to a crudely drawn penis.

While UCLA students and administration were initially furious over the defacement of school property, most have recanted on their accusations now that multiple sources have attributed the work to famously anonymous English street artist and political activist, Banksy. This marks the second time in the past two years that Banksy visited and tagged Westwood with one of his acclaimed works.

“The cartoonish yet nuanced style, the underlying social commentary about the inconsequential nature of sport rivalry in America in face of global turmoil – this is obviously a Banksy original,” sneered famed German art collector Lars von Hammerstein. “He’s truly outdone himself this time with a truly powerful piece that demands attention.”

Administrators wanting to clean up the sign as quickly as possible are now dealing with a student body intent on preserving the work in its original form.

“It’s ridiculous that our administration would even consider taking down a beautiful, meaningful work of art,” said Christopher Lee, a junior art history student with a minor in bullshitting. “I bet most USC students are pretty jealous that someone as highbrow and important as Banksy chose our campus as his personal canvas.”

Numerous UCLA students have already vowed to camp in front of the sign, protecting it from anyone who tries to deface or remove the piece. Some students are even willing to forego attending the aforementioned football game if it means protecting the sanctity of the work.

Meanwhile at USC, an anonymous group of students are reportedly shocked to have gotten away with spray painting a dick on a major university campus without any consequence or reprimand. 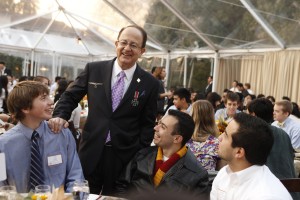 As USC continues its restoration and expansion into the area around the University Park Campus, President C.L. Max Nikias and other school administrators now realize it would have been wise to brainstorm a little more before settling on naming their initiative the Master Plan. USC’s Master Plan – which has nearly nothing to do with... MORE »