James Marlow’s lifeless body was discovered in his NYU dormitory on Monday. His death remains the subject of heated debate among the NYU community, and although autopsy reports are pending, investigators have determined that the seemingly young and vibrant student led a double life as a middle-aged man.

“Usually untimely deaths like this one are drug related,” said police chief Harrison Smith. “Not this kid – he didn’t do drugs. But he had quite the magazine collection, used phone books and apparently possessed a flip phone.” 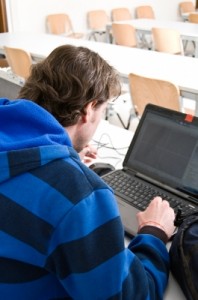 More scandalous than his preferred reads were phone calls Marlow placed the day before his death. AT&T records show that Marlow made at least five phone calls to New York City-area numbers the night before he passed away. One of them clocked in at over twenty minutes, and all were placed on Marlow’s Nokia flip-phone.

“It was weird that he didn’t have a smart phone,” tweeted Marlow’s roommate, Jason Levinsen. “But talking on the phone? Who does that? I think James was talking to a girl. At the time, I ignored it, but looking back… I can see now that it was a call for help.”

“Before that night, he’d always texted like the rest of us,” Levinsen continued. “I would’ve done something, but I was tweaking my OkCupid, Match, and HowAboutWe profiles.”

Investigators sought to better understand Marlow’s cause of death by analyzing the content on his Facebook and Twitter pages, but their search led to a grave discovery: Marlow had neither a Facebook nor a Twitter page. One staffer mistakenly thought he had found him on LinkedIn, but thereafter surmised that the James Marlow he encountered was in fact a sixty-year old software developer living in New Jersey with no apparent connection to the deceased NYU student.

Marlow’s family and friends are left scratching their heads. “We thought we knew our son, but this is some weird shit,” said Marlow’s mother, Jean. “What kind of college student doesn’t use social media? Even I’m on Facebook, but I never friended Jamie because I didn’t want to embarrass my scrumptious pumpkin.”

“We don’t know where to go from here,” Smith finally conceded. “We haven’t seen anything like this in a long time.”