Penn State and No Teller 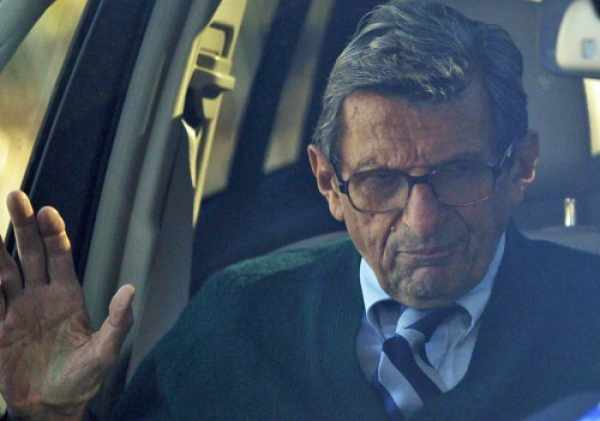 After grueling, exhausting, never-ending minutes of trying to decide how to spin the Penn State fiasco into something humorous, I realized: it cannot be done.

Sure, I could make a joke like, “I would have expected something like this at a school with a “Saint’ in the name, but a state school?!” And sure, some people would chuckle, maybe even lol, while others would be instantly called to action. And by action, I obviously mean sitting in their Scooby Doo pajamas at their computers, half-eaten bag of Cheetos by their side as they comment anonymously about how insensitive such a joke would, theoretically, be. If I were to make such a joke.

But I won’t give them the satisfaction. Because they already have Scooby Doo pajamas, which means they’re plenty satisfied.

Still, I feel that the subject must be discussed.

Now you can see what kind of monster this guy is. That show is terrible.

I digress. So Sandusky is set to star in Sherlock Holmes 3: Elementary School, My Dear Watson and there’s a cluster-fuck happening in Happy Valley (Note: that is the actual nickname for Penn State’s football stadium, I’m not being gross) and yet Penn State students are rioting. Why? Because their football team lost its coach!

So now, Penn State needs to worry about a new president, a new football coach, students rioting in the streets and tipping shit over, AND an investigation that goes back to 1999 when Sandusky allegedly began to hit the showers in the worst way.

With all of this going on, you’d think that there would be some sensitivity in the media, right? I mean, surely, if anything could call those scandal-worshipping, soulless “journalists” to ease up for a little while and realize that “Sex sells,” doesn’t apply to underage boys, it’s this. Right?

Not a chance. The front page of every paper: Joe Paterno. The headlines on every “news” channel: Joe Paterno. The media haven’t been this excited at a public gaffe since”¦Tuesday, when Rick Perry forgot the name of a section of the government. In Perry’s defense, he was going to cut that section anyway, so the name wasn’t all that important, right? Shakespeare, “What’s in a name?” all that good shit.

What I’d like to know is: how did this whole thing become about Paterno? Is the crux of the situation not that there were boys molested at a college campus? At what point did it become alright to disregard the tragedy and skip straight to the scandal, complete with juicy gossip, speculation by sportscasters and former football players (who, as far as I know, do not hold law degrees), and, worst of all, a media frenzy over, “What will Penn State do without JoePa?”

I’d hope that one thing they’ll do without him is begin a policy of no child molestation.

In closing, 11/11/11 may not have been the apocalypse that some predicted. But a sports icon has allegedly covered up child abuse, a potential president aims to cut an entire section of government but isn’t entirely sure which one it is, a volcano erupted in Turkey followed by, naturally, a shitload of snow, the American and European economies blow harder than a “90s kid on a Nintendo cartridge, and people are sleeping outside in the cold because the people running the world decided that not everyone deserves a job, money or houses.

How many more signs do we need that the world ended?