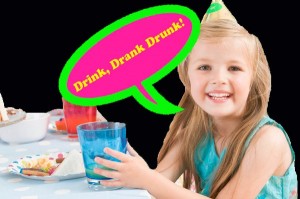 The party, celebrating Yung’s second annual double-digit age, was complete with 12 rounds of Kiddie Cocktail wells (one for good luck), a game of Flip Cup and Yung being “iced.”

Large 12 has been hosting kids’ birthday parties within the past few months ever since owner Ivan Carr realized the vast profit the bar was making. Large 12 has earned the nickname “12 & Under” as Columbia citizens will find numerous prepubescent children pounding shots at the bar on any given night.

“Large 12 is the only thing people talk about during recess,” Yung said. “Seriously every day you’ll hear someone yell ‘Yo, Large 12 tonight bitches!’ from the top of the slide. Playground pregames are the tits.”

Yung’s birthday party was a hit and many of the guests confirmed they had a good time and were happy with the venue chosen.

“I just got a fake a few weeks ago but got super blacked out one night and lost it, so I was really relieved when Tom chose Large 12 for his birthday party,” 10-year-old Brittany Botch said. “Wow… everyone got so hammed,” Botch added in spoken thought.

According to sources, the birthday parties become pretty outrageous, and the night usually ends with body shots, table dancing and a lot of drunken PDA.

Large 12, the first bar in Columbia to highlight underage drinking, is in talks to revamp their menu making it more underage friendly. This new menu will offer drinks such as “Jungle Juicy Juice”, “Past My Bedtime” and “Pedia-shitfaced”.

Columbia mayor, Bob Nyave, has hopped on board with the new campaign Large 12 has been supporting.

“Kids are the richest people in this city thanks to their allowances! Kids don’t have jobs and kids don’t have a ton of homework like the college students. Do you know what that means? Kids have a lot of time to hit up the bars. If this means our economy will experience a boost, I’m all for it,” said Nyave.

Monday nights, recently dedicated as “12 & Under Night”, have unbeatable drink specials. Sometimes, however, the cops can be an issue with giving drinking tickets. Last Monday night, police officer Stew Pudd, walked past a group of children playing “Drunk Drunk Goose” outside Large 12 to find 21-year-old Nick Waste throwing up. He proceeded to give Waste a ticket of public indecency.

“These legal kids need to clean up their act. If you’re of age to drink, you should be of age to get your shit together,” said Pudd.